Travel: Lengthwise of the calle Almirante Cadarso, from its junction with the

Burriana Street until the end in the Gran Via Marques del Turia.

Sale of chairs: outsourced to Sitdownmm.com.

The great stop Mora of the Falla admirals does not require presentation.

A year over this Committee strives to offer the city of Valencia, in the

It has characterized it.

Moorish marches, the seduction of the ballets and the colours of the thunderclaps and the participants

men and women of our Committee and guests.

San Jose, your classic ride and the outsourcing of the sale of chairs for

viewers, 38 our stop BlackBerry Edition will offer as

The participation of three bands of music (Musical society of)

one of which will be completed twice stop travel.

COB their choreography "Nahash", which collaborates in the Organization of this stop

Mora and in costume female, being also this year the ballet that will take the

Captain Moor of Alcoy; the Ballet "Dreams of the Nile" directed by Larissa's

Valencia and the row-Ballet of the Houri, that is our biggest Faller in Valencia

2013, Begoña Jiménez Tarazona, and his Court of Honor, with choreography of the

Around 12 brackets (participants) of men and women, with clothing

anniversary of its stop Mora.

Row level (Alcoy): One of the oldest and most numerous participants of

Alcoy, holding the Mora captaincy in 2014. Good work, sobriety and

elegance alcoyano parade, will be the ideal counterpoint to this stop.

Mora, in formation of squads both the pageantry the elderly.

Animals (wig riding school of Alcoy) participation in the

pageantry, as well as expected the beaters rope horses, although this year

on a Buffalo. And, of course, the floats (art Facte de Sant Vicent) with your

Admirals again proposes a show that you can not miss. 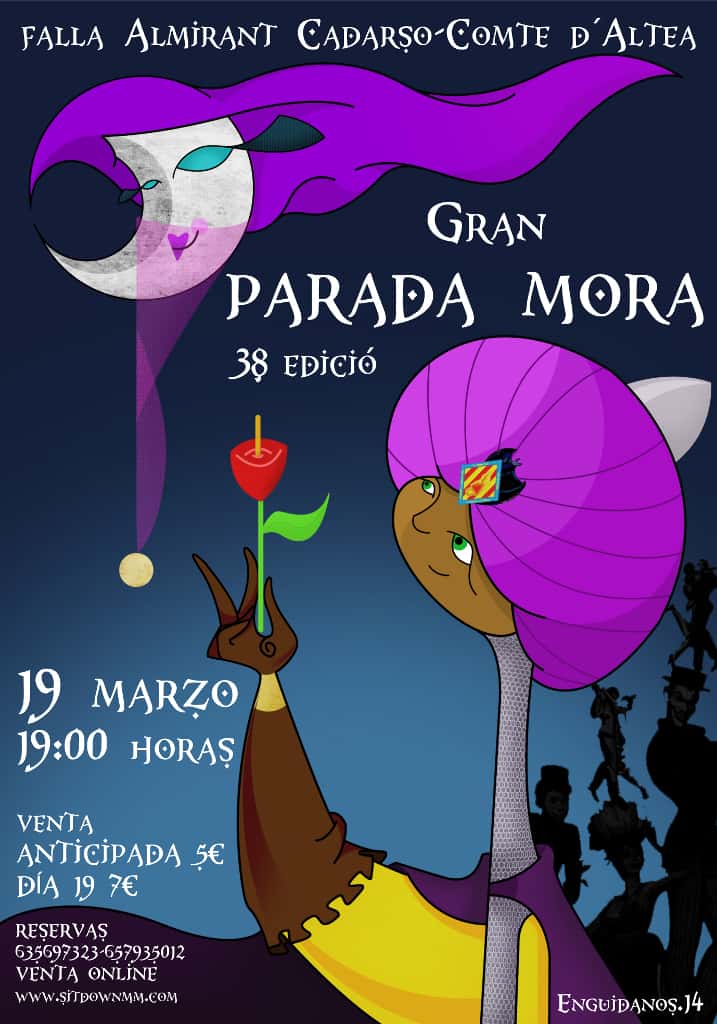